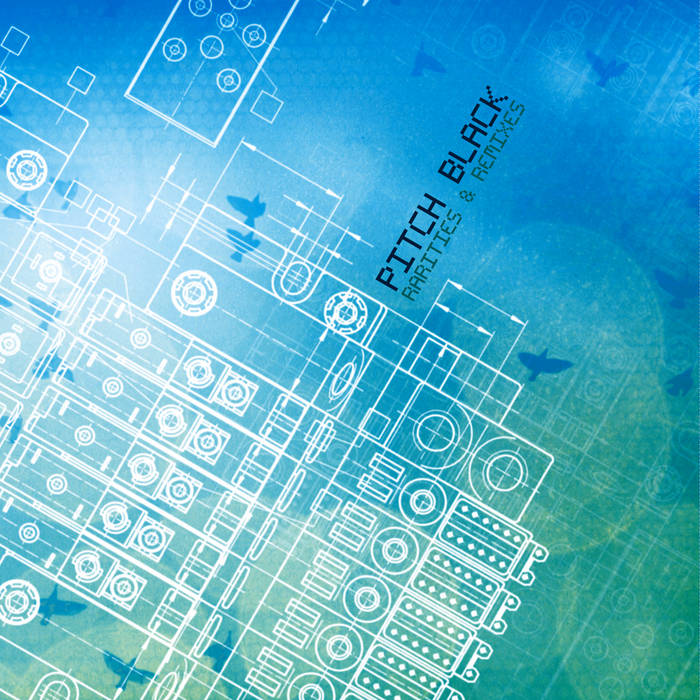 rivendell Oft, Pitch Black, full of secrets and surprises, have a few of there releases and love them all

Reuben Lipski Pitch Black... Love these guys. They've got this real distinctive sound that I've never heard from anyone else. I liked them years ago when I first heard them, but it wasn't until I started making amateur electronic music myself, that I'm really able to appreciate the smooth, articulate, and somehow perfect sound that Pitch Black seem to achieve with every track. Favorite track: Kaikoura Dub.

Rarities & Remixes – the latest album from Auckland’s Pitch Black – is a package of rare tracks and lovingly crafted remixes of other artists’ music, chosen by Paddy Free and Mike Hodgson to represent their fifteen year reign as Aotearoa’s favourite electronica act.

Known globally for their stomping, genre defying live sets, Rarities & Remixes showcases Pitch Black’s mellower side, the one that also makes them favourites in the living room. The album begins with the call of the kōauau (Māori flute), the intro to a dancefloor friendly, but respectful reworking of the Richard Nunns and Hirini Melbourne original, ‘Te Po’ and ends with an equally haunting version of Tiki’s ‘Past Present Future’. Bookended by these distinctively local soundscapes, Rarities & Remixes represents the past, present and future of the Pitch Black partnership.

Included in the remixes are tracks by fellow Aotearoa/NZ dub trailblazers International Observer (‘House of the Rising Dub’) and Salmonella Dub (‘For the Love of It’), along with ‘The Opaque’ by independent music producer Tom Cosm, and ‘Sensimillia’ by reggae legends Katchafire – all fed through the PB warping machine. Representing from further a field is ‘Mirror Beach’ by Mirror System (the ambient project of Britain’s System 7), and ‘A New Day’, a remix of a Sri Lankan track that Pitch Black remixed for the Laya Project, a collaboration of regional folk musicians affected by the 2004 tsunami.

For Mike, the remix process is a chance to share creativity: “We love getting other artists to remix our tunes and we really enjoy remixing others’ music. It gives us a chance to play with different types of sounds and composing techniques. I love getting the parts of these songs and creating a folder of sounds in response to the track. This quite often gives us the sound field and sonic vibe for the remix.”

Whilst all of Pitch Black’s four studio albums have been followed by a compilation of versions by local and international artists, this is the first to showcase their own remixing output, and Mike and Paddy enjoyed the process of going back over all the old dats.

“From 1996 to 2011 we have had many chances to remix other artists’ songs, and these have been released on a variety of albums and compilations around the world – this Pitch Black release gives us a chance to put them all in one place. It contains tracks from the very beginning of us working together right up to a track finished earlier this year,” says Paddy.

Included on the album are three Pitch Black originals that were either never released or were on compilations or short limited runs. Purists will love the inclusion of 1996’s ‘I’m a Wanderer’, the first track the pair worked on together.

“I had a long drums and effects jam that I wanted to turn into a song and Paddy was keen to work together so we took this long evolving track and chopped it up into a structure and then added Paddy’s vibe to it,” remembers Mike. “Pitch Black was born.”

‘I’m a Wanderer’ showcases the industrial beginnings of what would become the Pitch Black sound – a dynamic balancing act between heavily sculpted basslines and choppy melody that has been acknowledged by many as an evocative soundtrack to the Aotearoa landscape. In contrast, the pastoral ‘Protect the Grain’, a windborne ambient track released on the limited edition EP Flex around the time of widespread anti-GE demonstrations, represents Pitch Black at their gentlest.

Also included is ‘Kaikoura Dub’, a previously unreleased track from which a snippet was used on Whalerider to accompany Paikea’s journey away from her village, during the scene when she heard the whales calling her home.

Mike explains how the collaboration came about: “In 2000 I bumped into Niki Caro and she asked if we had any tunes lying around that she could use for Whalerider. We had just come back from a session in Kaikoura where we had jammed a new track into a long 23min mix. I put that on CD for her and she ended up choosing a sliver for the film. We subsequently used the bones of this track for the tune ‘Elements Turn’ on Ape to Angel but it’s great to find the original two track recording and release it.”

Pitch Black have always been more than a dance act, but on Rarities & Remixes they demonstrate the full reach of the musical territory they love to explore.

7. I'm a Wanderer
Pitch Black
1997
This is the first track we wrote together.
Originally released on the Curious Records compilation "On the beat'n'track"
Written and produced by Paddy Free and Michael Hodgson
Published by Native Tongue Music Publishing